“After all, Ginger Rogers did everything that Fred Astaire did. She just did it backwards and in high heels.”

Let’s talk about my friend Lois Lane. Well, friend may be pushing it. She’s someone I work with who terrifies me. Why is she terrifying? Maybe it has something to do with the fact that she broke the glass ceiling in a man’s world and is constantly being punished for it by her friends, colleagues, and her a-hole boyfriend who doesn’t trust her enough to give her a Secret Signal Watch or tell her his “secret” identity (psst! I’m talking about Superman).

Let’s get one thing straight from the start: Lois Lane is a damn fine reporter. 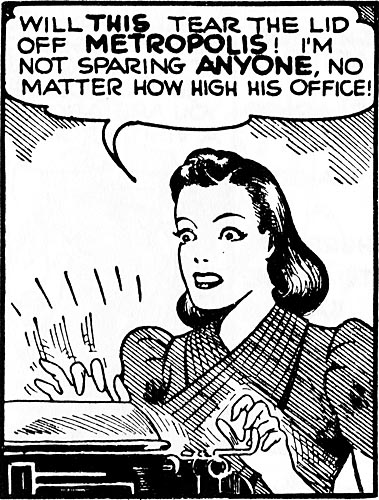 Not only is she fearless, intrepid… 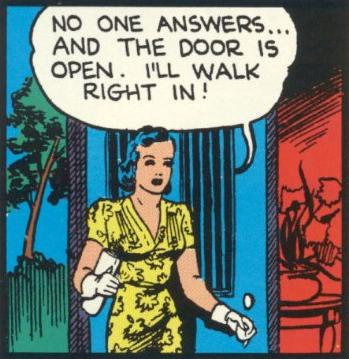 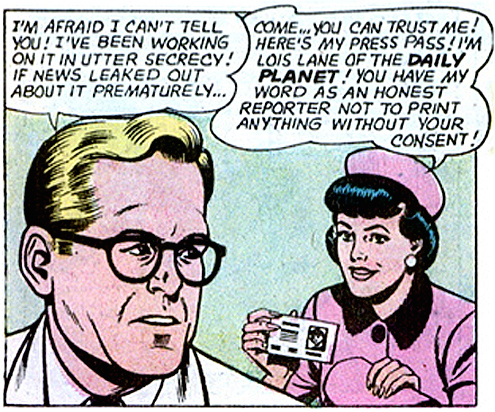 This was during her Jackie O. phase. 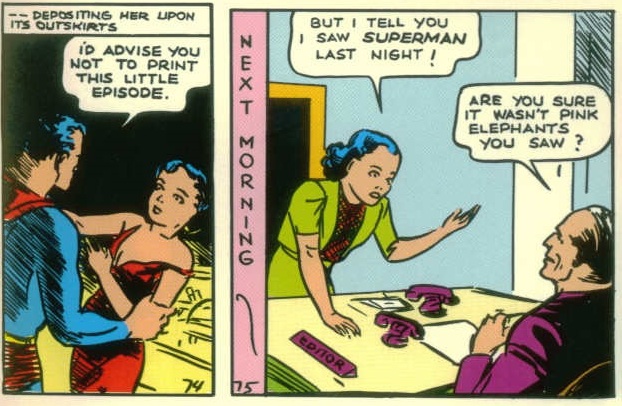 And then she picked up the phone and hit Perry in the face with it.

…and she managed to win a Pulitzer Prize despite Perry White constantly throwing all kinds of sexist assignments at her. 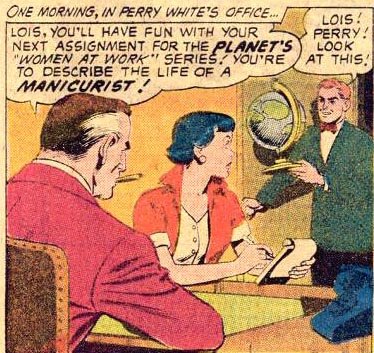 Remind me to tell you about that globe sometimes (SPOILER ALERT: it spins).

Not to mention the fact that she has to put up with “Clark’s” sexual harassment. 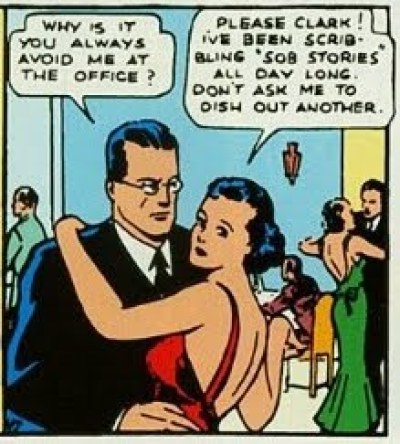 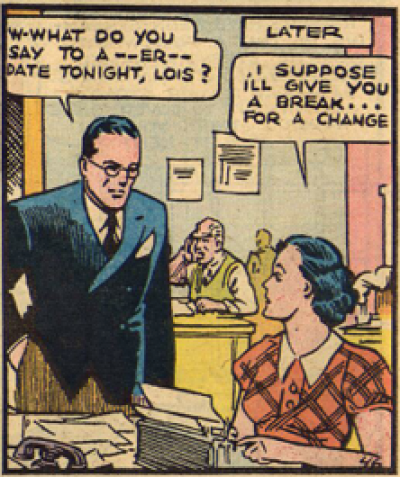 Way to wear her down, “Clark!”

This is all to say she’s the best journalist I know. She has to be. “Clark” may be able to take as many “sick” days that correspond to Superman’s outer space trips as he likes but Lois is held to a different standard, a standard that demands she be “slender” and “pretty” in addition to brilliant and competent but will still always label her a “girl reporter” no matter how good she is.

Take, for example, the time a magician claiming to be Circe, the ancient witch of Greek mythology, drugged Lois and hypnotized her into thinking her head had transformed into that of a giant cat.

This type of stuff happens more often than you’d think in our line of work.

Oh, sure. Maybe she over-reacted by having a giant lead-lined aluminum box built to hide her imagined giant cat head and retreating from all human interaction but did she deserve what came next? 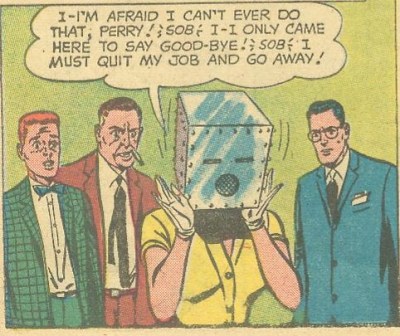 After Superman broke into her house, read her personal diary, and discovered what had happened, did he go to her and tell her? Of course not. First off, he lies to her in his patented Superman fashion… 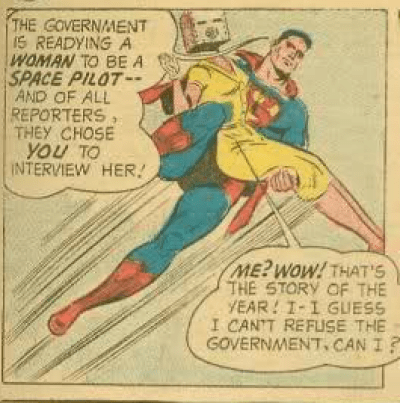 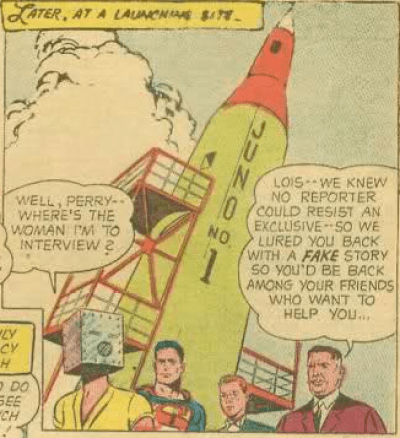 Then he throws two buzz saws at her head. 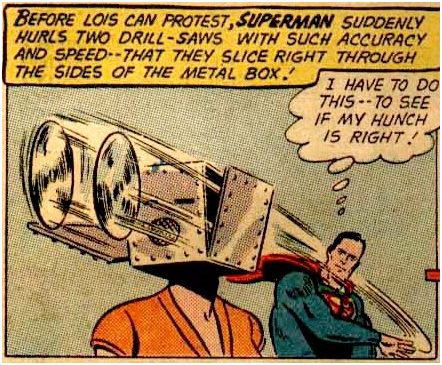 Yeah. You check on that “hunch,” Superman!

I think that bears repeating. HE THREW TWO BUZZ SAWS AT HER HEAD. And that’s not even the most insensitive thing he did that day. 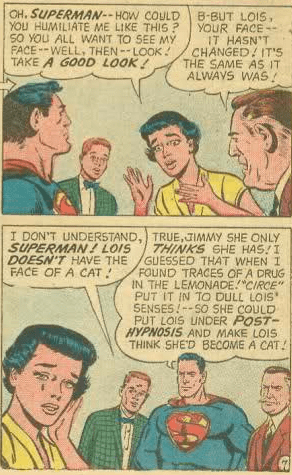 Hey, guys. Let’s stand around and talk about Lois’s psychological problems like she’s not here.

Let’s get one thing straight, “snooping” and being “curious” is Lois Lane’s GODDAMN JOB. There’s no lesson to be taught. She was drugged and psychologically tortured while trying to unmask a psychic fraud. Do you know how dangerous psychics are, Superman? They prey upon people suffering from tragedies for profit.

Also, remember how you BROKE INTO LOIS’S HOUSE AND READ HER DIARY THAT DAY??? Snoop. 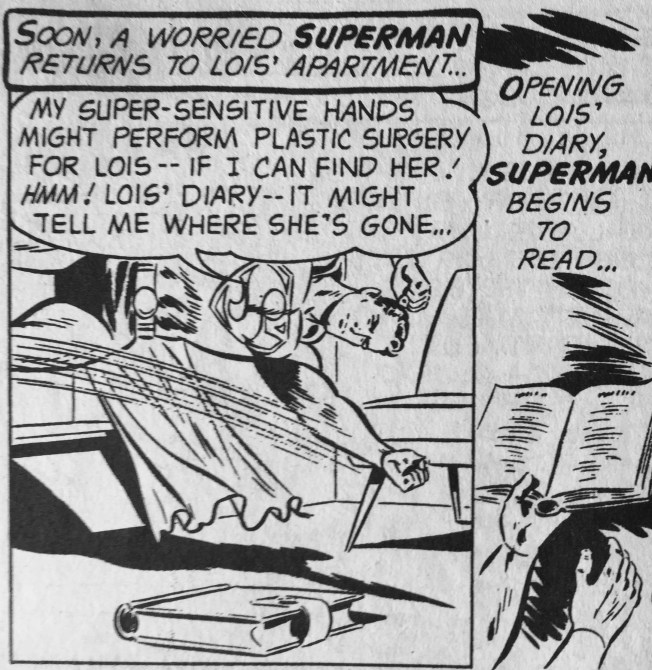 Never mind that you wanted to perform plastic surgery on her with your “super sensitive” hands.

To sum up: Lois is great, “Clark” is a creep, Superman’s a hypocrite, and Perry White is a raging misogynist.

Also, Superman stuck Lois with the check at that restaurant. There’s no room for wallets in that outfit.