Hi! My name is James Bartholomew Olsen. I used to be famous for being the “best boy pal” of a certain strange visitor from another planet. Nowadays I’m just a regular ole cub reporter in his mid-thirties wondering where all the years have gone (go to college, kids).

My life hasn’t been boring: I’ve been an Elastic Lad, a Giant Turtle Man, and even a Nazi Field Marshal (there’s a reasonable explanation). I’m here to share some of my stories and hopefully figure out a way to pivot out of the dying medium of print journalism and into the digital age. I should probably take the Nazi thing out of my bio, shouldn’t I? 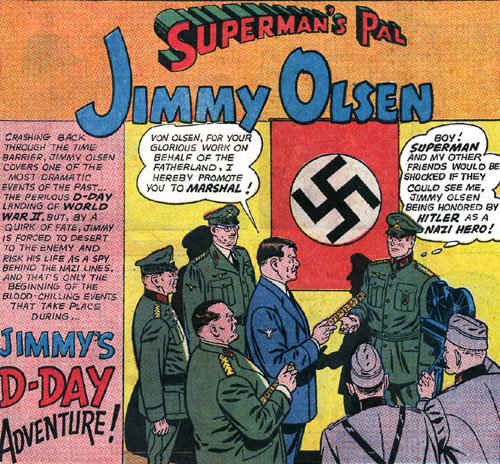 So what can you expect from this blog? A lot of time has passed since I first met Superman and there’s a lot of dirt to dish and things to unpack. Also, probably some “Supergirl” TV show recaps.

One could say I wasted a LOT of time thinking the domain name for this blog. Don’t believe me? Here’s a sample:

OlsenReport – Because I’m a reporter and my last name is Olsen.
SuperReport – Because, you know, superheroes and stuff.
SuperDuperReport – “Super-duper!” is my catchphrase so…
SuperFiles – Like the X-files but about super stuff.
OlsenFiles – I like files.
CubBeat – I’m a Cub Reporter and this is my beat.
CubFiles – Again with the files.
ElasticTruth – I was Elastic Lad and I’m here to tell the truth!
GiantTurtleNews – Kind of liked this one.
GiantTurtleFiles – Again with the files.
GiantTurtleReport – You get the idea.
GiantTurtle – Did I mention I was a Giant Turtle Man?
OlsenTruth – Do I need to explain this one?
TeenSidekick – Too long, but accurate.
AgingSidekick – Too negative. You’re only as old as you feel.
ElasticReport – This was really word association at this point.
Olsency – I used a blog name generator and got this.
Sidechic – Like a sidekick who is chic.
ActionBeat – Because of “Action Comics.”
ActionReport – I can’t believe I wrote this one down.
RedKryptonite = weird stuff
Olsenite – Get it? I’m like my own Kryptonite?
RedOlsenite – Weird tales + Red hair + Red Kryptonite + Me
SuperTruth – Sounds too conspiracy nut.
jimmy-olsen – JimmyOlsen was already taken.
KidSidekick – Too many k’s.
DeadSidekick – Too dark.
RecklessSidekick – Too long + too many k’s.
RecklessKid – Okay, I googled “sidekick tropes.”
SuperOlsen – I had to have called myself this at some point.
SupergirlsBoy – Crassly trying to piggyback on the new show.
BestBoyPal – The creepy thing Superman calls me.

As you can see, I was super into the words “Report” and “Files.” And to be honest, I was kind of partial to “Giant Turtle News” but my sometime, sort-of, not really girlfriend Lucy Lane hated every single one of them. Except “Rubber Report.”
I know. That still doesn’t answer the question.
Well, in my sometime superhero identity of “Elastic Lad” I was known as “The Boy of Rubber.” Well, maybe “known” is stretching it (pardon the pun). Superman is known as the Man of Steel. Two people called me the Boy of Rubber. One of them was me just now. 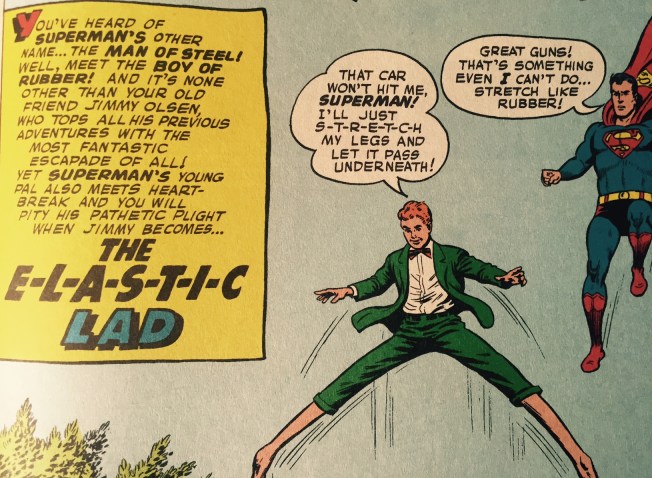 The other one was a narrator.

Anyhow, when I was choosing my twitter handle just about every variation of my name and various nicknames and alter egos had already been taken so I landed on @boyofrubber. Wanting to keep a little brand awareness when I started the blog so I chose “The Rubber Report.” Then I realized I’m famous and should probably have my name somewhere in the title and so now it’s “Jimmy Olsen’s Super-Duper Rubber Report.”
Upon reflection, I probably should have just bought JimmyOlsen.com off whoever GoDaddied it.
Tune in next time, when I will have hopefully figured out how to watch “Supergirl” on somewhere other than my laptop!

2 thoughts on “I WAS A TEENAGE SIDEKICK”