We’ve all heard the tales of the secret society known as the Beard Band. But what really goes on inside their secret meetings? Do they just talk about the latest advances in comb and trimming technology? 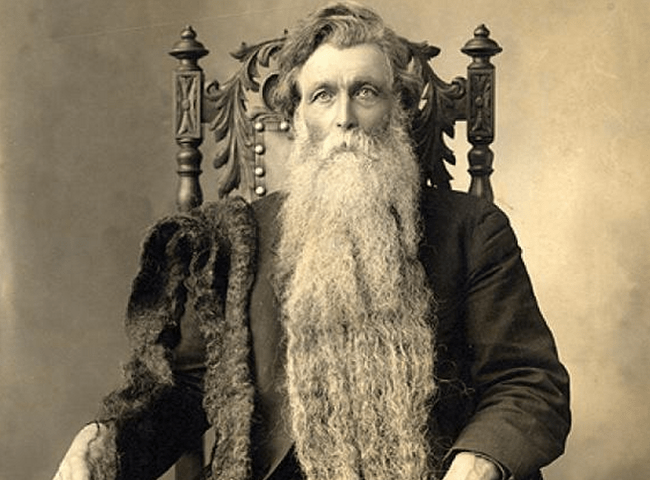 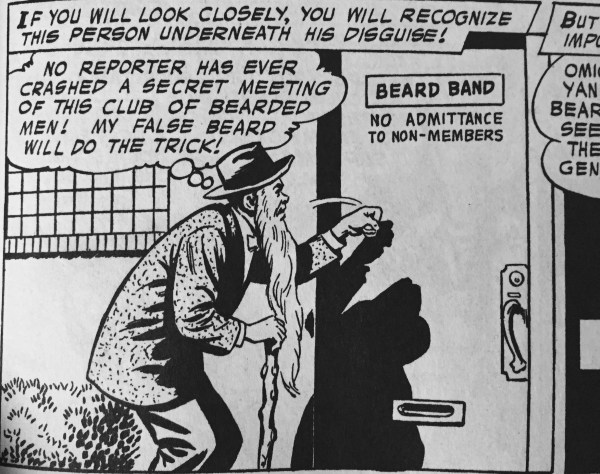 Stenciled doors are a dead giveaway to your secret society BTW.

Sadly, my clever disguise was seen through within two seconds. 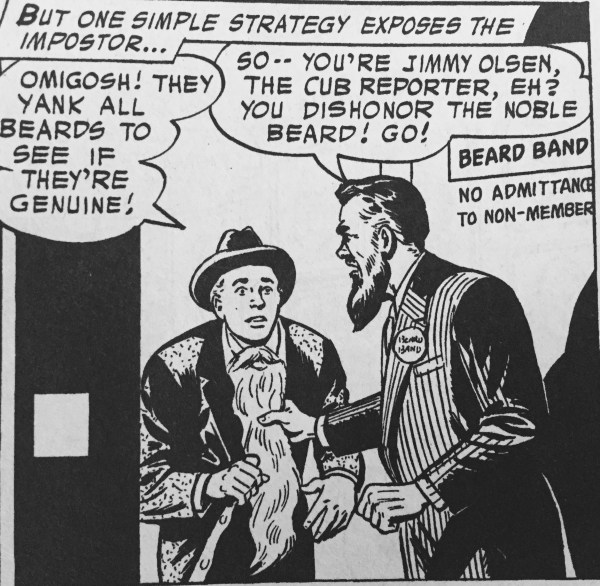 I knew I should have used spirit gum!

but lucky for me I ran into a complete stranger with a glass of mysterious liquid for me to drink. 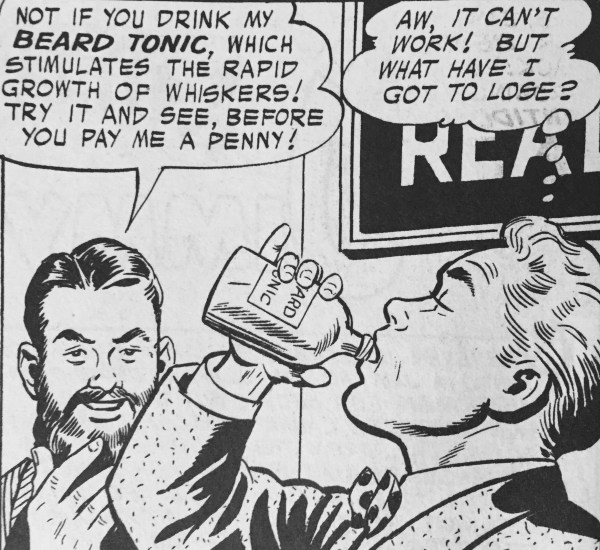 WHAT COULD POSSIBLY GO WRONG??? 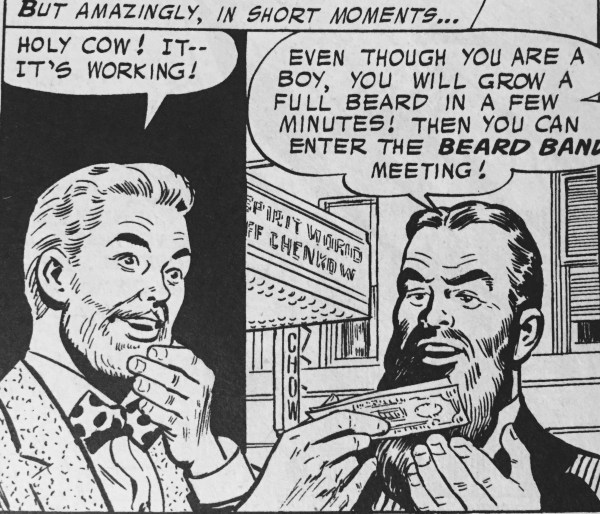 Finally, something on my chin to stroke!

I got into the meeting but it turns out that nice bearded stranger wasn’t as nice as he had seemed. 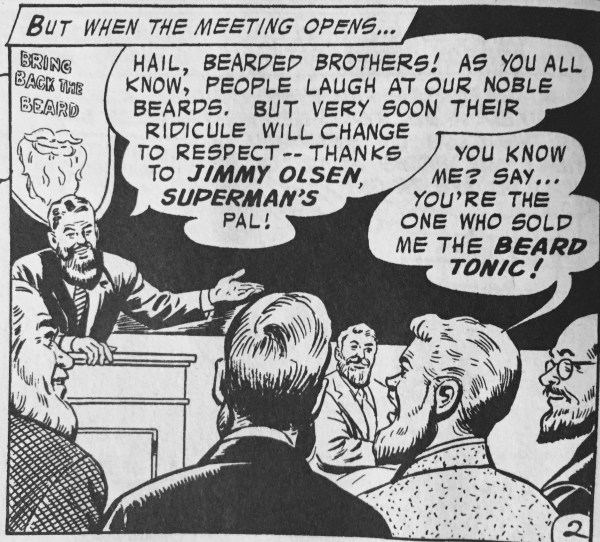 I THOUGHT YOU WERE MY FRIEND???

He was, in fact, the president of the Beard Band and refused to give me the antidote for the beard tonic (thus cursing me to have hair constantly growing out of my face) unless I became a spokesperson for the club. Normally, I don’t do celebrity endorsements (at least not ONLY for antidotes) but they had me by the long hairs on this one. 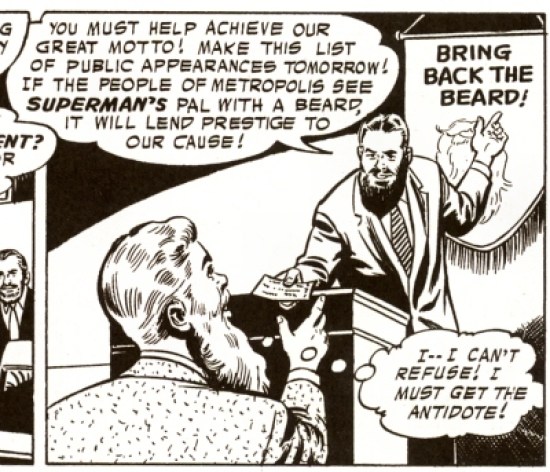 What happens to the motto if they do bring the beard back?

Amazingly, there were several beard related events happening the next day including the opening of a terrible play about noted beard enthusiast Father Time… 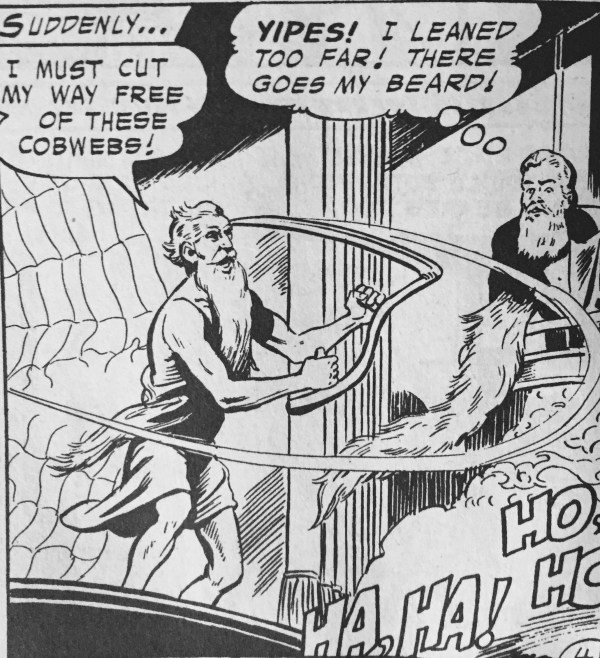 What kind of production swings a REAL SCYTHE around the stage? Also, there were 2nd Act problems.

…a dedication of a park statue of Robinson Crusoe… 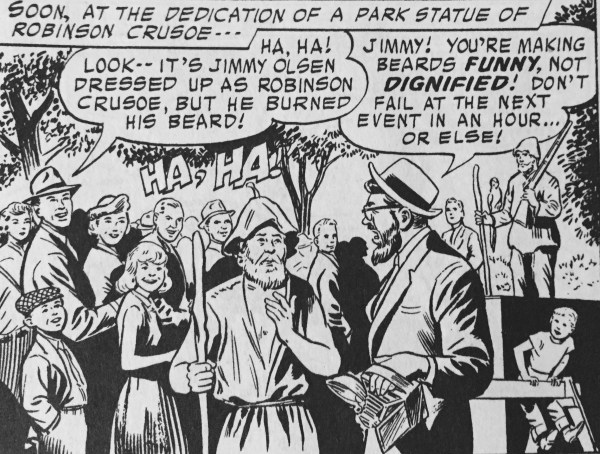 You know, like the Robinson Crusoe statue you have in your park!

…a Seven Dwarfs exhibit and the premiere of a “Rip Van Winkle” movie (part of the new Washington Irving cinematic universe). One might even wonder if the beard wasn’t already back?

Somehow I managed to bungle each of these public appearances, turning the idea of a beard into a thing of ridicule (much to the chagrin of the Beard Band publicist). 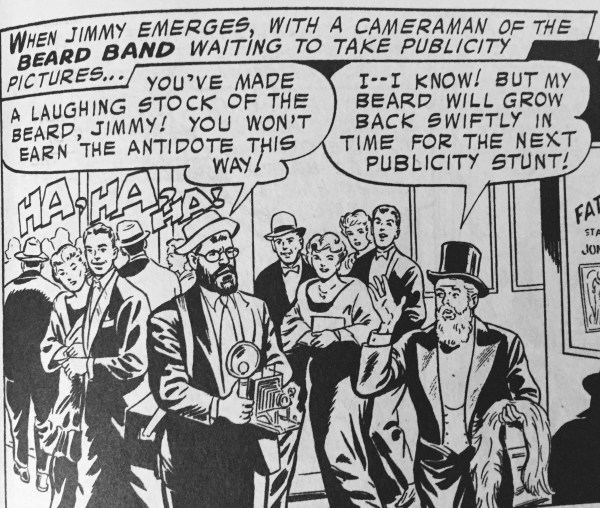 He gave the Beard Band a good rate seeing as how he’s a member.

I did manage to catch some crooks with the beard they shot off my face! 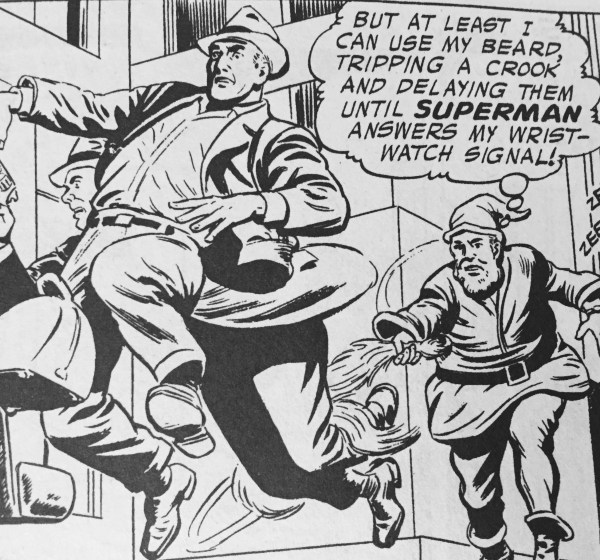 Do not attempt. Trained beard professional.

But the Beard Band was not happy and decided to go with Plan B. 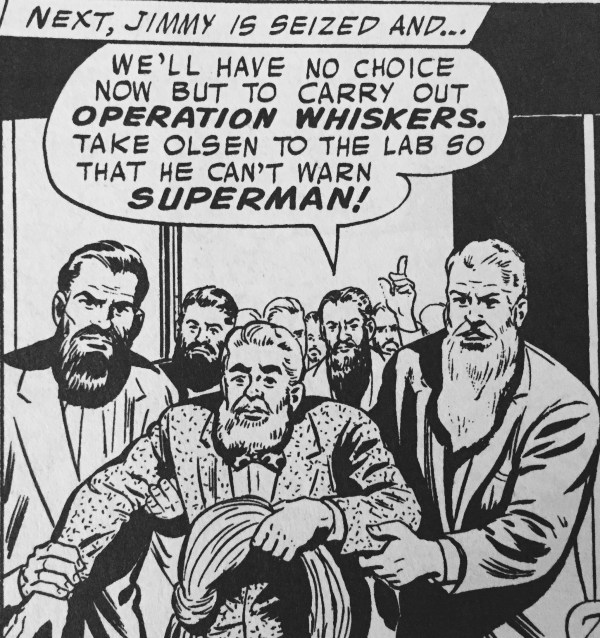 Sadly, Operation Whiskers did not involve an adorable kitten.

These radicalized beardists decided to poison the Metropolis drinking water with beard tonic! 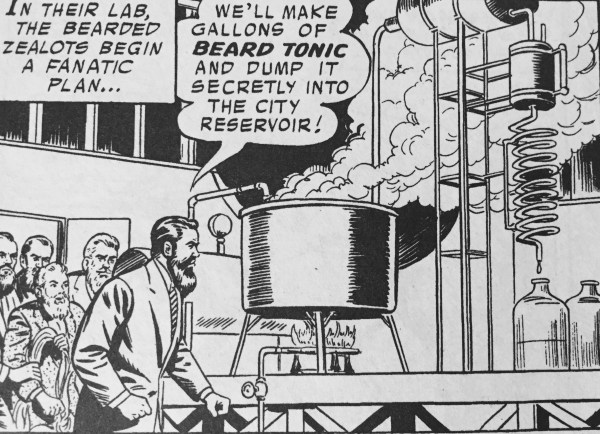 I wonder where Christopher Nolan got all his great “Batman Begins” ideas from. 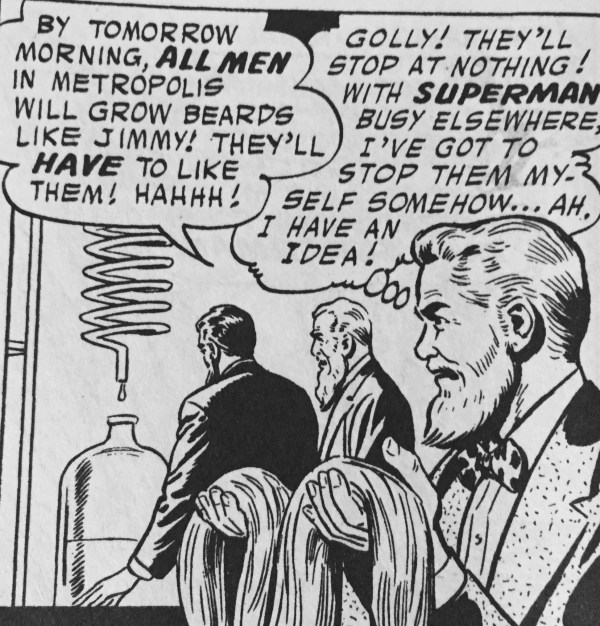 I did what any normal, law-abiding citizen with a thirst for beard justice would have done. I took the beard I had cut off to use as a lariat to climb out of a ditch (long story) and threw it for no apparent reason! 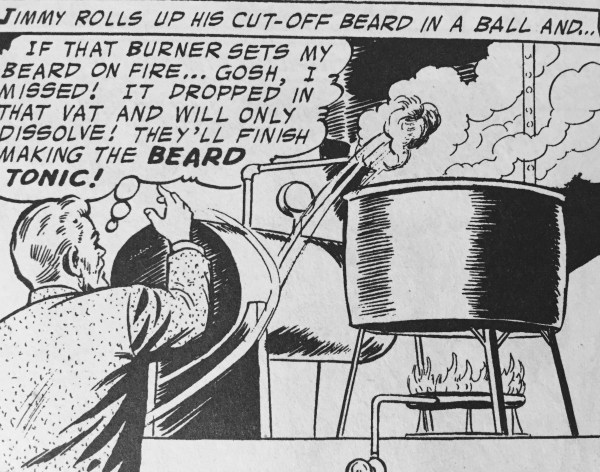 Careful. I hear someone put dissolved beard in the tonic tonight.

Thankfully, because of my illogical actions and…uh…science, my beard somehow turned the beard tonic into a beard tonic antidote and wiped out the Beard Bands beards. Of course, then Superman finally decided to show up and take the credit. 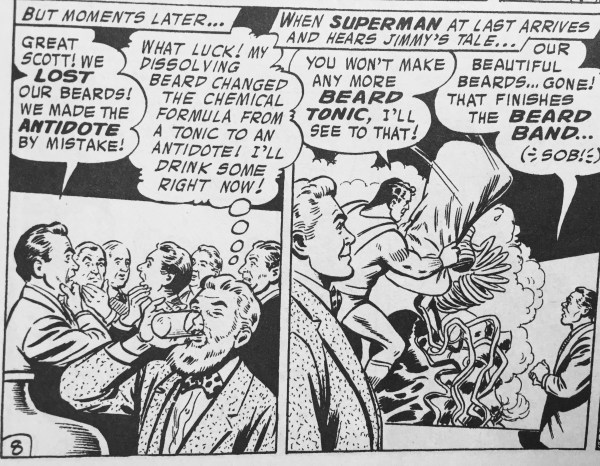 This is how science works.

It appeared that clean-shaven goodness had won the day but, alas, we underestimated the power of the Beard Lobby and the lack of clear laws regarding adding beard tonics to drinking water. The Beard Band paid a few fines and walked away without doing any jail time and within a few decades had realized their mad hipster scheme to bring beards back into fashion… 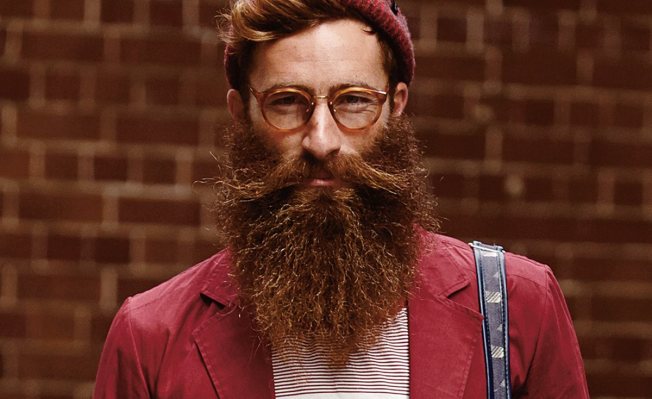 Time to change the motto.